Elsewhere in the Mediterranean

When you mention Italy and flooding, the infamous “acqua alta” immediately spring to mind, the tidal peaks that regularly cover the streets and squares of Venice, as happened in January 2020, to a much greater degree than usual.

People also remember the vast floods in the Pô Valley or the River Arno which, in November 1966, seriously damaged cultural and architectural heritage in the city of Florence. The flood also killed 34 people in Tuscany, including 17 in the capital.
Yet, while Italy has a Mediterranean climate, apart from the Padano Plain, it is entirely mountainous (Alps and Appenines) and as such, experiences torrential flooding on an almost annual basis.
Added to this, the country’s relief and geology are also a virtual breeding ground for spectacular landslips and landslides (frane).
Flood risks are particularly accentuated on the coastal fringes where surface runoff from the hills and mountains descends on densely populated areas below with startling ferocity. Genoa and the Ligurian coast are particularly vulnerable and regularly experience catastrophic flooding as happened in 1970, 2010, 2011, 2014 and more recently in 2019
comme cela a été le cas en 1970, 2010, 2011, 2014 et plus récemment en 2019. 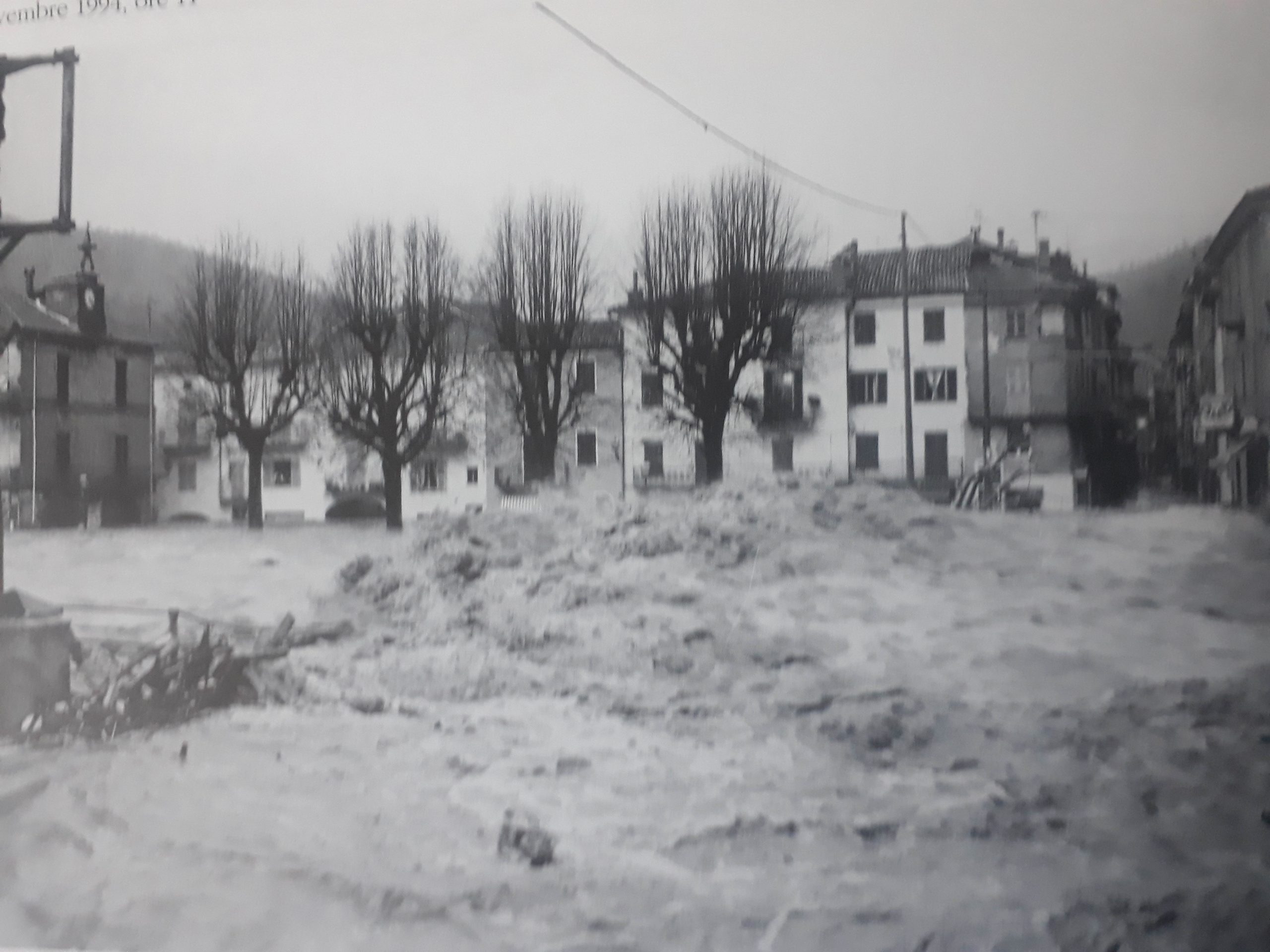 The Tanaro, a tributary of the Pô, in flood, engulfing the town of Garessio in the Piedmont, on 5 November 1994. These floods caused 69 deaths throughout the Piedmont and seriously damaged many hard-working communities.

Standing between the Atlantic and Mediterranean, Spain and the entire Iberian Peninsula are prone to extreme rainfall events.

Steeply sloping landscapes lend themselves to torrential floods that occur in many of its regions (Pyrenees, Cantabria, Sierra Nevada, etc.)
Land use varies greatly between densely built-up coasts and sparsely populated inland areas (with the exception of Madrid), meaning that most of the damage is experienced in coastal areas.
As a result, some major urban centres have radically altered their landscapes, such as Valencia. Following a major flood of the Turia, a coastal river that flows through the city, on 13 to 15 October 1957, the authorities decided to divert the river. The old riverbed is now a wide green corridor called the Turia Gardens where a number of sports and cultural facilities were built.
Other extreme weather events have hit both Spain and France, such as the Aiguat in 1940 (see page 34) and the floods of 26 to 28 August 1983 which affected the entire Basque Country.
Autumn 2011 was a particularly rainy and destructive period in Spain, France and Italy, as was the case, more recently, in 2019 when Catalonia, Valencia, Murcia and Madrid all suffered major flooding.
Finally, another memorable event was the Biescas disaster on 7 August 1996 which claimed the lives of 87 people in a campsite in this town in Aragon, at the foot for the Pyrenees.

While we have our “Cévenol episodes” in France, the Spanish have a similar phenomenon called “Gota fria”, which mainly occurs in the autumn. Gota fria can sometimes combine with another weather event called DANA (Depresión Aislada en Niveles Altos, or high-altitude isolated depression). This happened in October 2018, several days after the floods in the Aude, when sudden heavy downpours triggered major flooding on the Mediterranean coast and in Majorca. 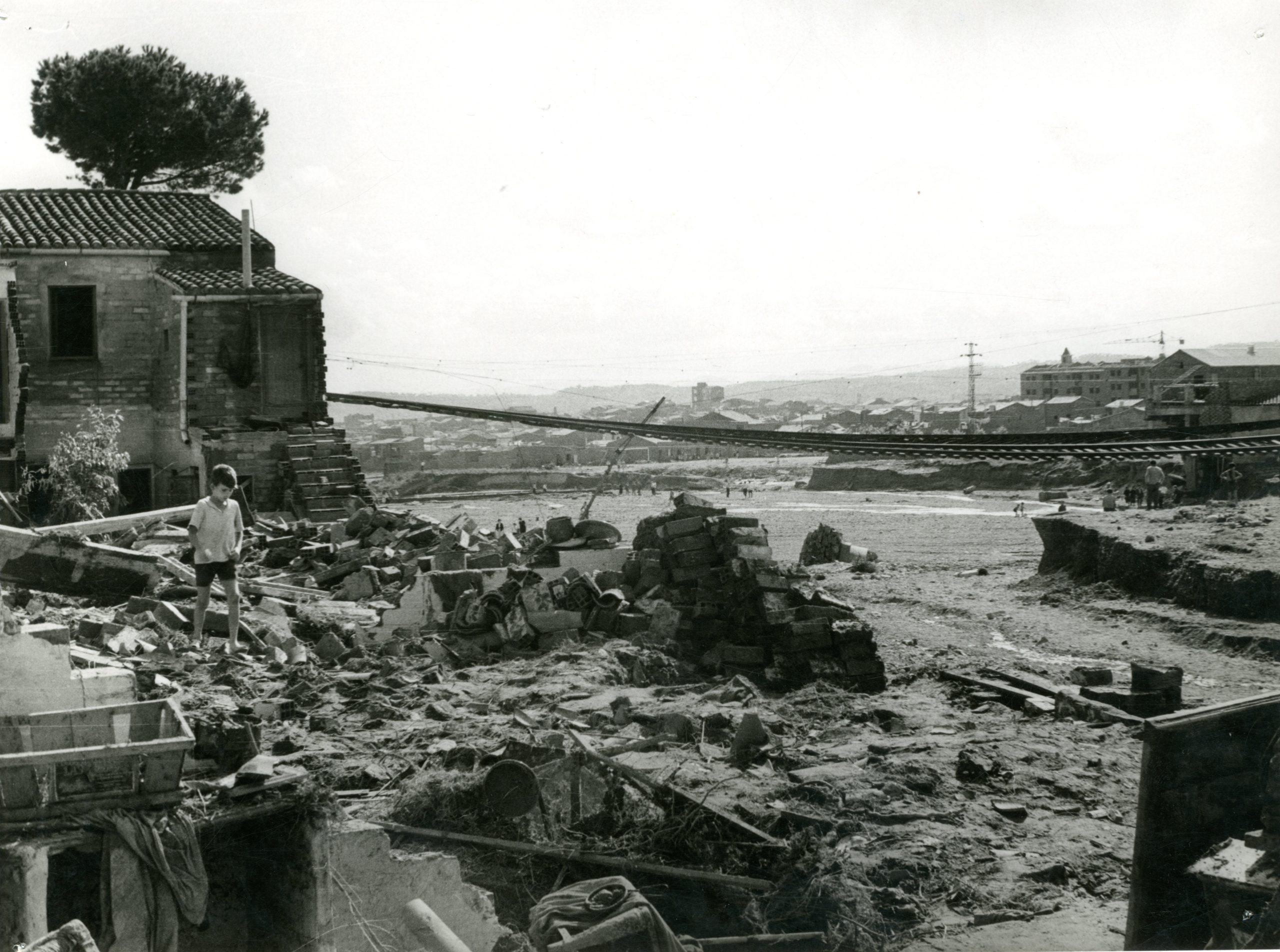 Terrassa (Catalonia), after the
devastating flood of the Riera de les Arenes which killed 351 people
on 25 September 1962.

GREECE AND THE BALKANS

With its steep mountain sides plunging into the sea, narrow coastal bands and frequently sprawling cities, such as Athens, the Balkans and Greece have also experienced their fair share of catastrophic floods.
One of the most recent was in May 2014 which caused huge damage in Serbia and Bosnia-Herzegovina, while on 15 November 2017, floods ravaged the town of Mandra, 50 kilometres west of Athens. 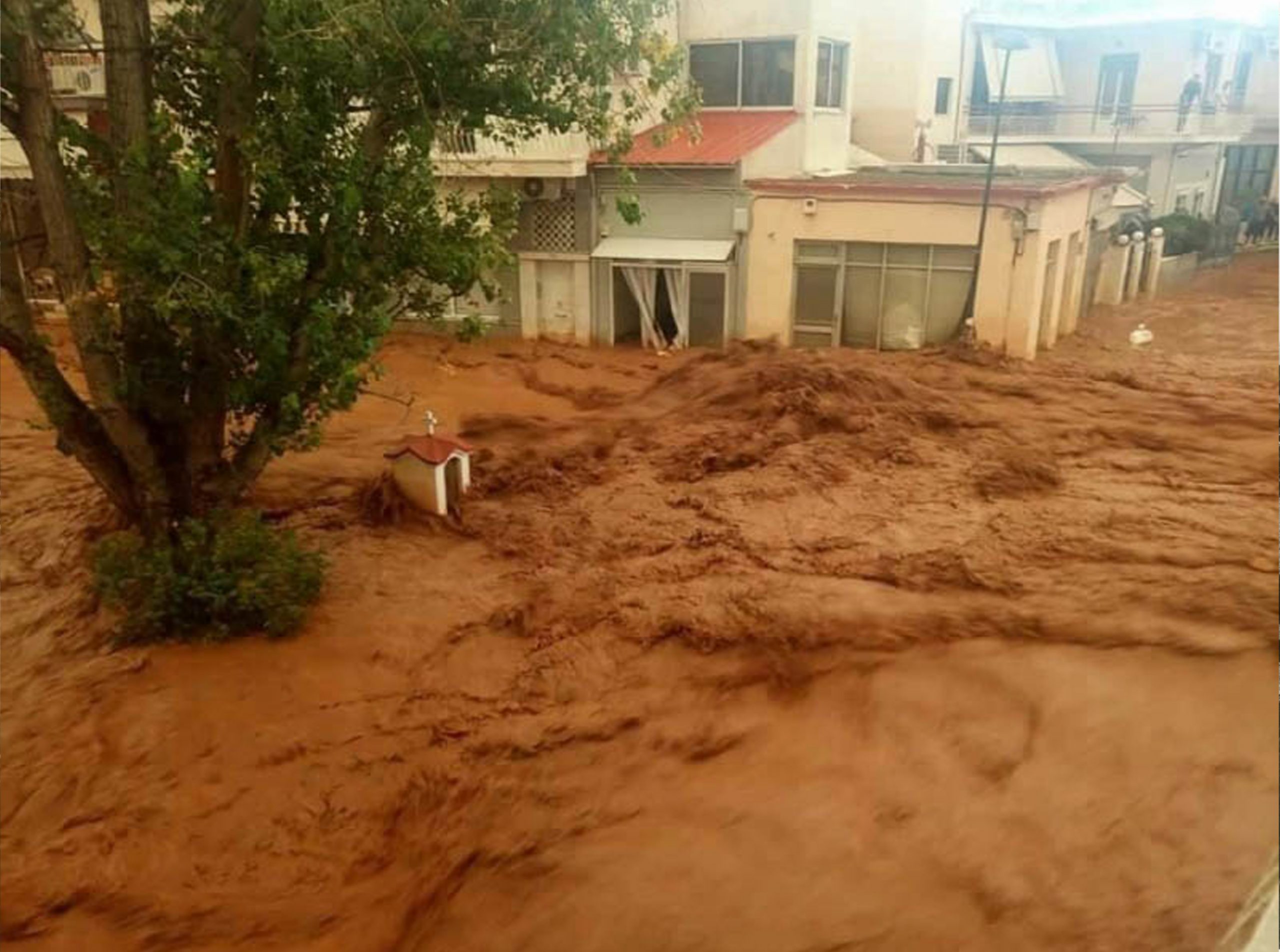 This part of North Africa has a very varied climate, coupled with exceptionally high relief (such as the Atlas mountains) bordering the Mediterranean Sea and Atlantic coastline. In between lie densely populated cities providing the Maghreb with all the ingredients for torrential flooding on a regular basis.
Many cities in Morocco have been frequent victims to flooding, such as Rabat, le Rif or the Marrakesh area where the Ourika, a popular river for tourists, regularly experiences flash flooding often on a monumental scale, as was the case in 1995 and 1999.
In Algeria, rural areas such as Kabylie are often hit by flash floods such as in November 2018, while large cities, such as Algiers, are vulnerable to wadis suddenly flooding. The district of Bab-el-Oued (the River Gate) is especially vulnerable and on 10 November 2001, hundreds of people lost their lives.

Finally, Tunisia is also prone to torrential rainfall. Indeed, Cap Bon was hit by
exceptionally heavy rains in 22 September 2018, which resulted in huge damage to the Greater Nabeul area. 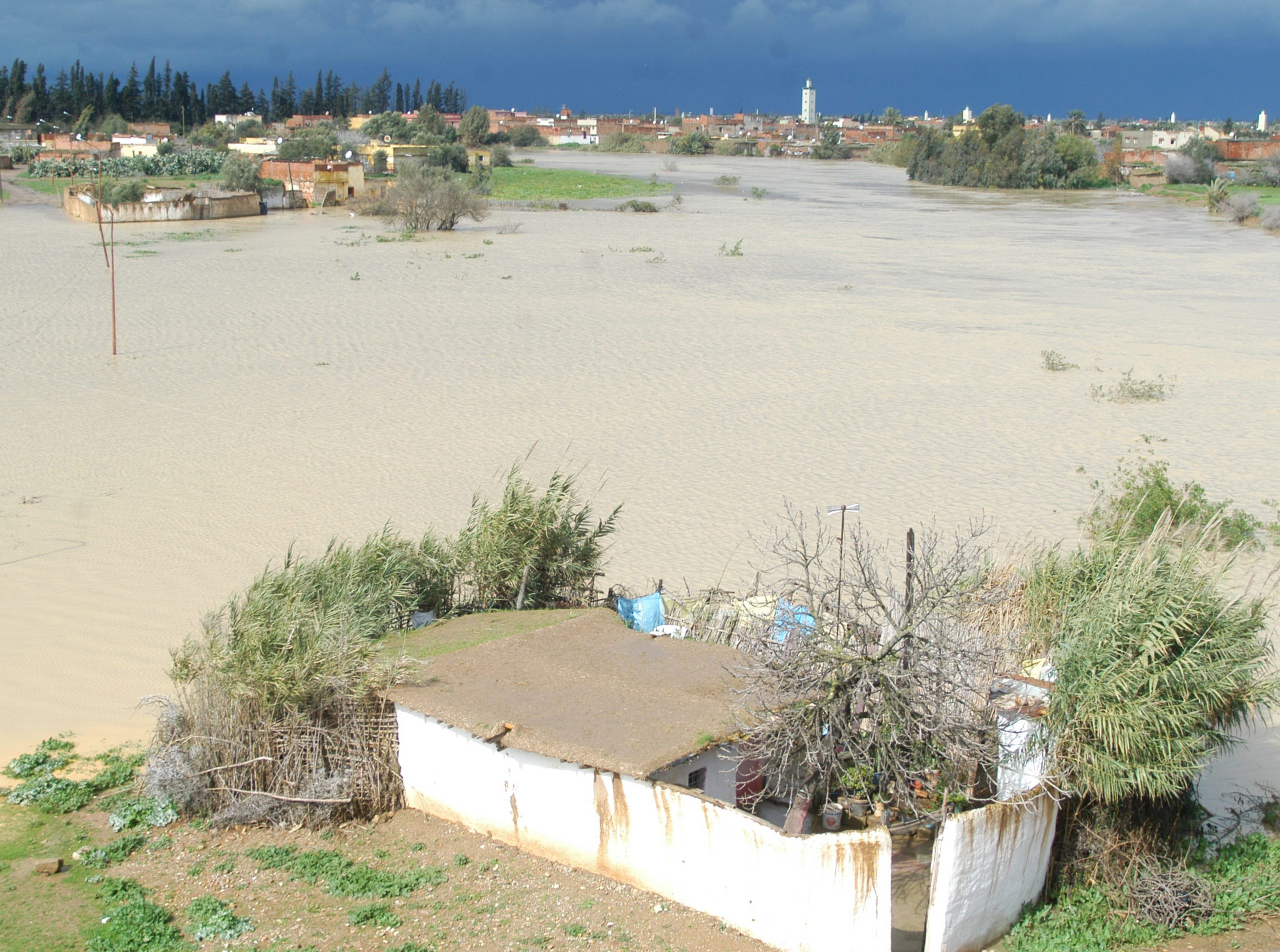 Northern Europe is more accustomed to moderate rain and seemed safe from the typically heavy downpours that we experience in the Mediterranean.
Yet, in July 2021, regions bordering Germany, Belgium and the Netherlands were ravaged by unusually powerful and destructive rains. Unused to events on this scale, more than 230 people died as a result.
The rain began falling on 13 July. It drenched the German region of Rhineland-Palatinate and North Rhine-Westphalia, as well as North East Belgium and South East Netherlands, triggering extreme, torrential flooding.

39 people lost their lives in the north east. Total rainfall reached 271.5 mm in 48 hours, on 14 and 15 July, at Jalhay (Belgium), while some rivers, including the Vesdre, a tributary of the Meuse, replicated the flooding seen on their counterparts in the neighbouring Eifel area.
Another downpour then hit the provinces of Namur and Walloon Brabant on 24 July. 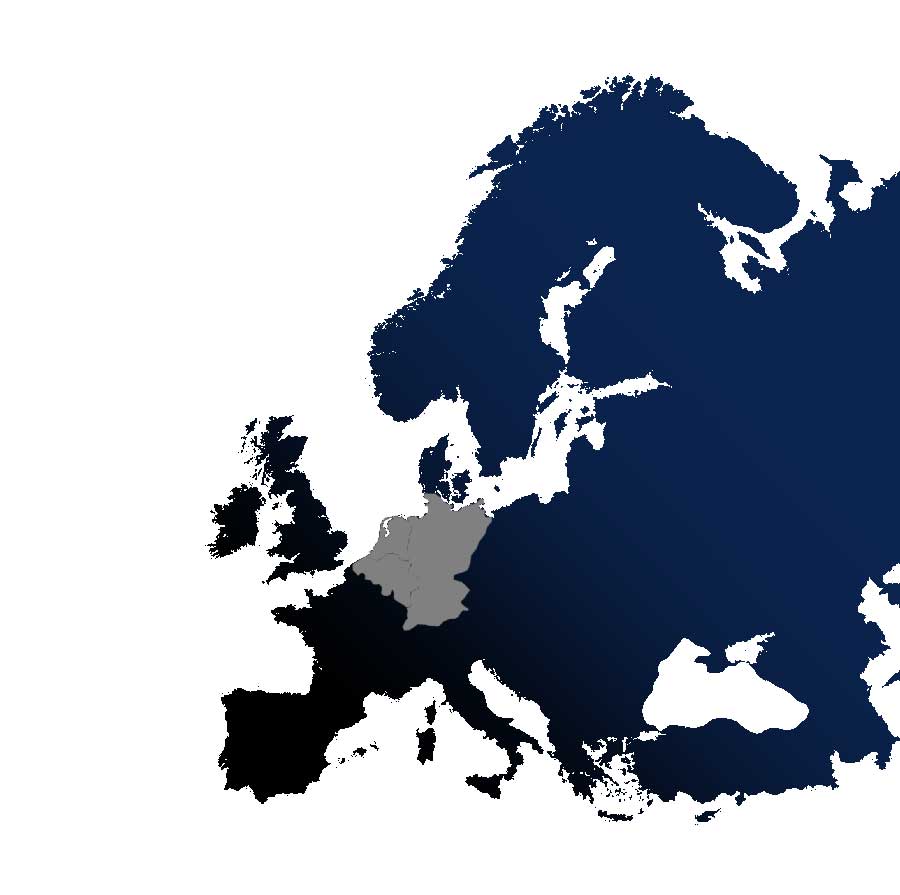 Verviers (Province of Liège), there were six fatalities and extensive damage when the Vesdre flooded.
Photo: Verviers Town Council

The Eifel mountains was the worst affected area, recording a total rainfall of 207 mm on 14 July, at Reifferscheid. Rivers in steep-sided valleys, such as the Ahr and Erft, swiftly surged over their banks. At Bad Neuenahr-Ahrweiler, 110 lost their lives when the Ahr flooded, while at Erfstadt a landslide buried dozens of people. In total, there were more than 190 fatalities in Germany. 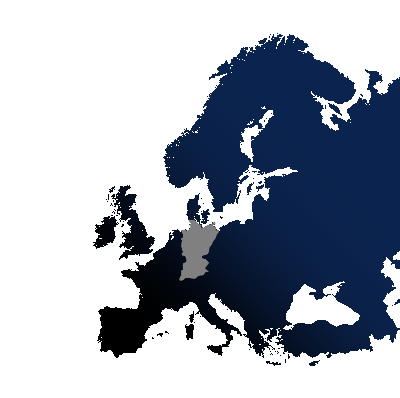 Destruction at Altenach (Rhineland-Palatinate)
The Ahr River had already sparked major floods in 1804,
1910 and more recently in 2016, but the 2021
flood was the most devastating.
Photo: Christoph Hensgen/WCR.

A consequence of global warming

This flooding is clearly related to global warming. In fact, research published by World Weather Attribution (WWA), involving 29 scientists from various research bodies worldwide, estimated that this type of extreme event is now 9-times more likely due to human-induced, warmer temperatures. They also found that climate change has resulted in a 3-19% rise in a one-day rainfall event volumes.
Heavy rainfall events are not only becoming more frequent in Mediterranean regions but their geographical coverage is also spreading to reach previously less flood-prone areas. These are particularly vulnerable as they are less well prepared to deal with the consequences, which explains the horrendous toll from the July 2021 floods.