In 2019 and in 2020, the Inter-regional Mediterranean Arc Flood Unit
organised a photo competition in conjunction with the MAYANE Association.
The aim was to inform the general public and regional authorities about the range of flood risks that exist in the 23 Departments of the
Mediterranean Arc region.

A jury of 18 experts awarded prizes for the 5 best photos in 2019 and the 3 best photos in 2020 in each of 3 themes.
A special public prize was awarded in 2020.
The winning photographers for the first competition explain the process that led them to capture their shots.

THEME 1
Water, the source of floods

THEME 2
Clues from floods of the past

THEME 3
Society protecting itself from flooding

The competition was free to enter and participants could use all types of
photographic equipment (digital and traditional cameras, smartphones, tablets or drones). 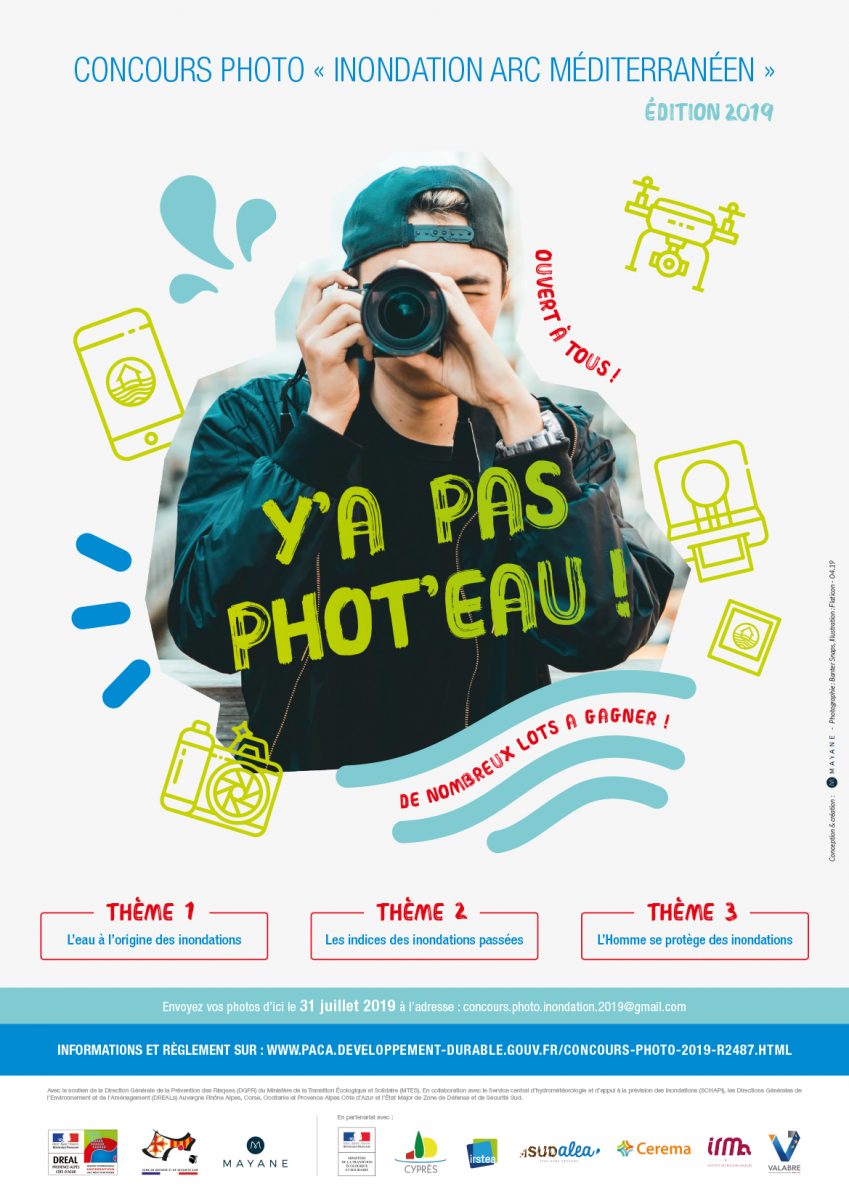 THEME 1:  Water, the source of floods 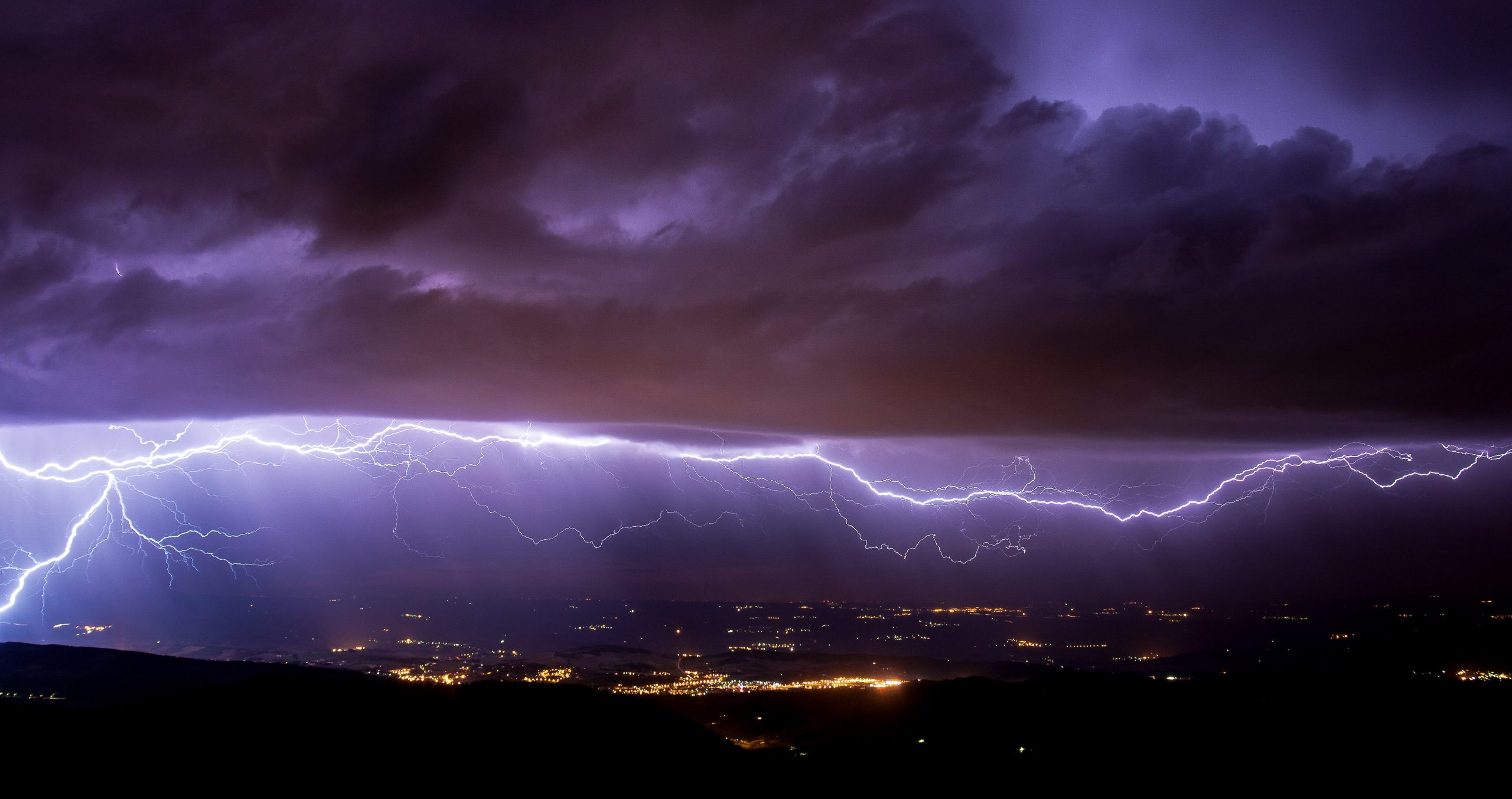 First prize: The storm is comin
Water, the source of floods

“After a mild, sunny afternoon in late winter (almost 20°C on 10 March 2013), the air became increasingly unstable towards the end of the day, indicating sudden showers or storms were on their way. I decided to go the hamlet of Saint Salvayre (Alet les Bains, Aude), where I saw a series of spectacular thunderstorms moving between the plain and the Upper Aude Valley. Although the storm cells weren’t especially powerful, my camera and tripod were nevertheless battered by the elements, including rain, sleet and strong gusts of wind.” 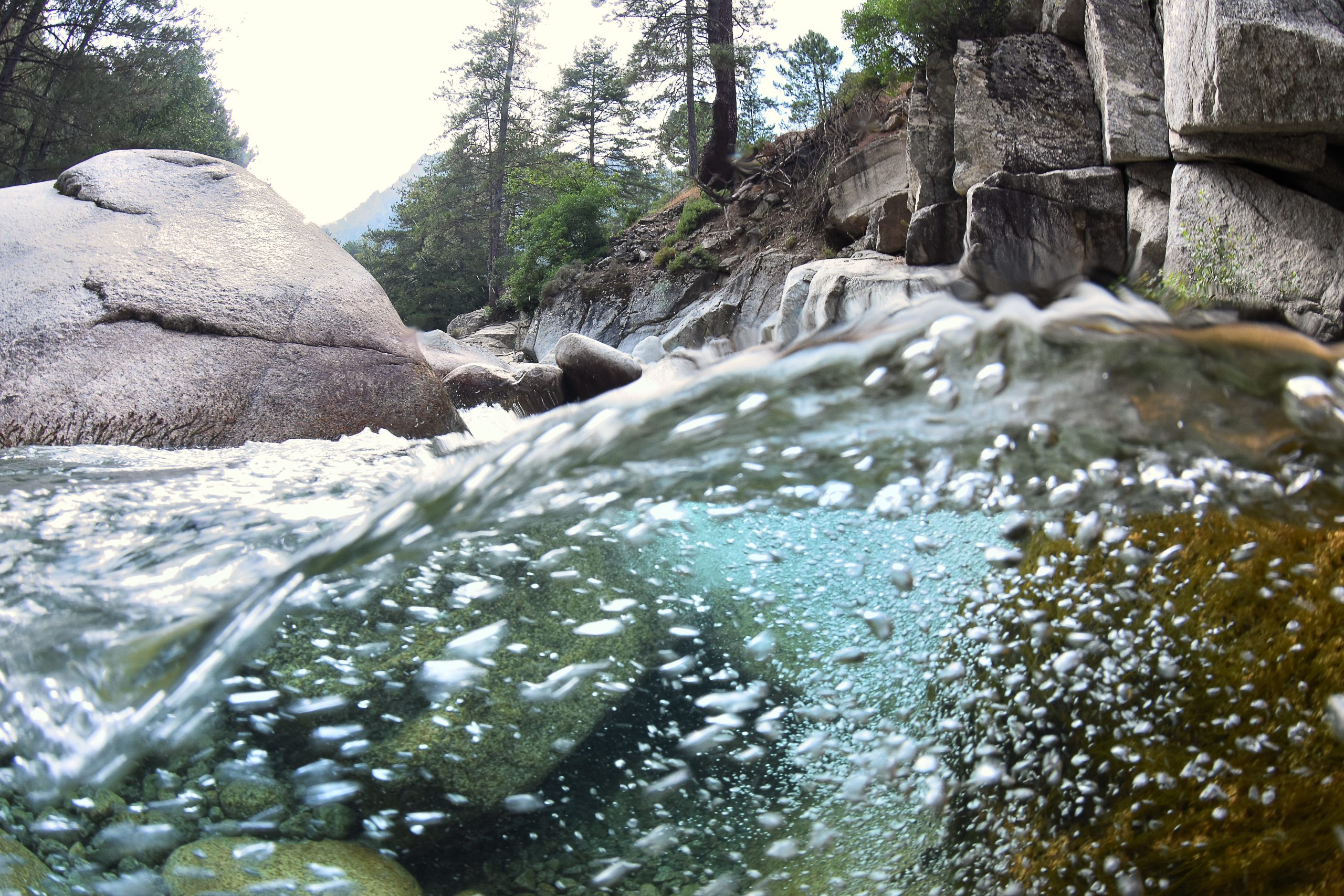 Second prize:
RESTONICA“These photos were taken in the Spelunca and Restonica Gorges, in Corsica, during summer 2018. I used a waterproof camera case. These rivers are so beautiful, revitalising and peaceful but they can become dangerous and destructive raging torrents. A few days before, on a river further upstream, the Zoicu Canyon flooded and five people were killed.” 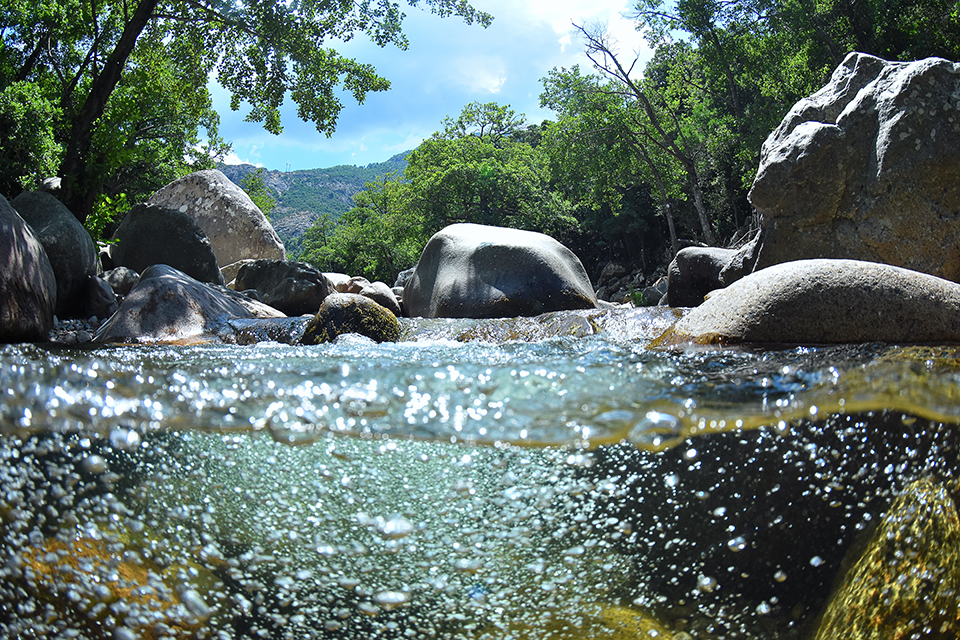 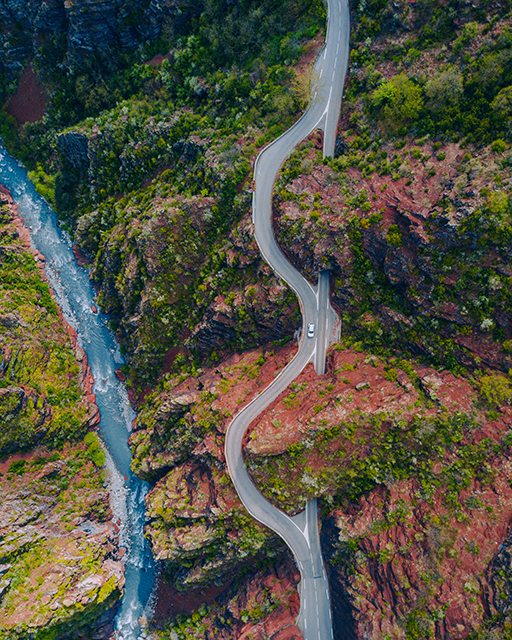 ““This aerial photo was taken in the amazing Daluis Gorges, in the hills behind Nice. The gorges are the result of erosion by the Var River and there are some great ripple marks in the rocks. The photo spotlights the historic impact of the Var, sculpting and shaping the red rock to look more like immense canyons in America as well as the way people have intervened to tame this unique landscape.” 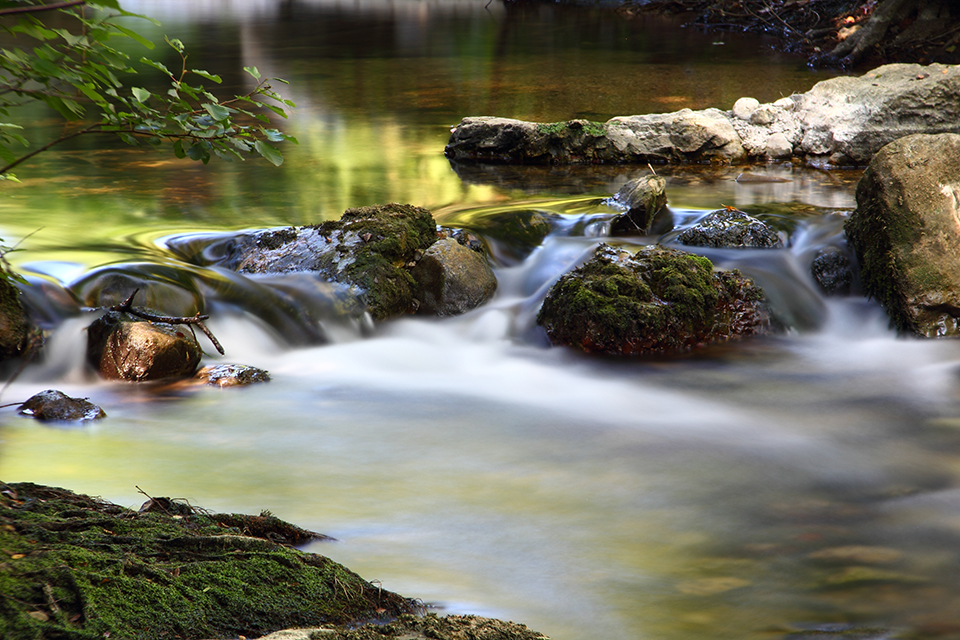 “It was a lovely sunny day, so I went for a walk with my camera along the banks of the Brague River, between Valbonne and Biot (06).
I was looking for tiny details that would really make my photos stand out. I paced up and down the riverbank, crouched down, turned around and compared angles to plan my camera shots. I finally settled in this spot, where some pebbles formed a small natural weir that was bathed in lovely colours and light and reflections that really appealed to me.
I set my camera down on its tripod, chose the settings and clicked the shutter. When I looked at the photo it was just at the height I wanted. Result!”

THEME 2
Clues from floods of the past 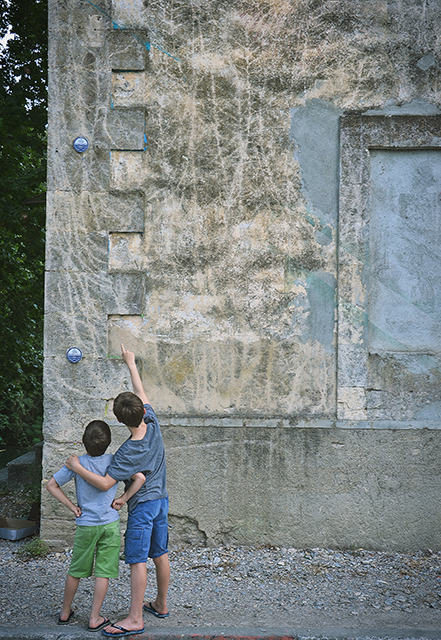 “ I’d already seen these flood markers out walking on the banks of the Lez River (34). When I heard about the photo competition and the theme, I instantly thought of this site, with its especially high flood markers. They were so high that my imagination ran riot. I would be underwater if it flooded!
I got my two sons, Louis and Simon, to pose, the elder son telling this little brother about it, hence the title, transmission.” 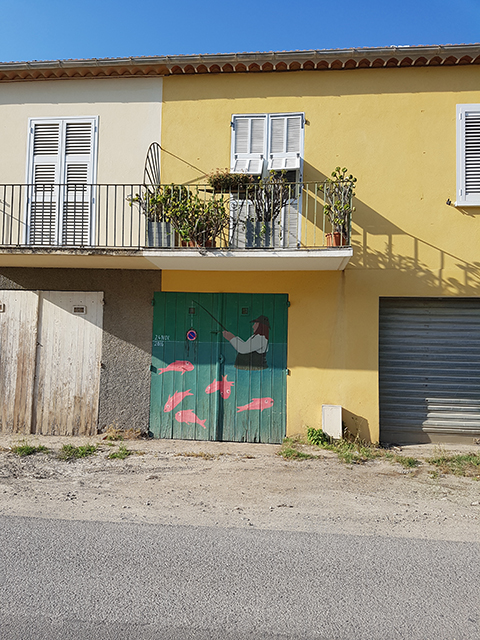 Second prize:
An amusing and resilient memory of the November 2016 flood at St Florent (2B)

“On 7 July 2018, it was the first day of our holidays in Corsica. My family, or “pinzuti” as the locals would call us, went for a walk in Saint Florent. We chanced upon a reminder of the horrendous floods from November 2016. As a civil servant on holiday, it was the most amusing and resilient example of the national flood marker database. Fortunately, there was just material damage which is now nowher. 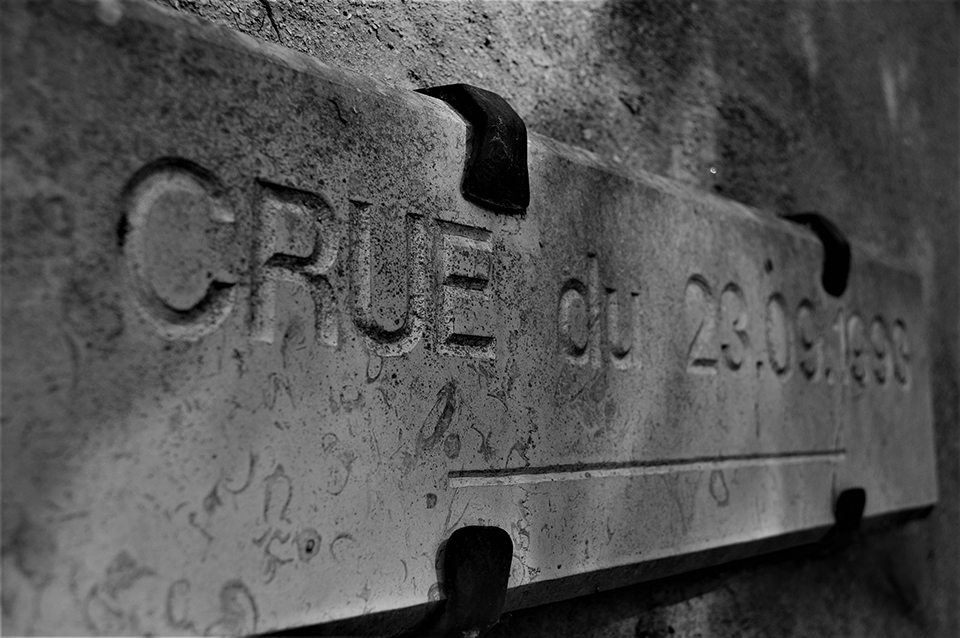 “A couple of words and a date carved in marble, resembling a tombstone, left as a mark of the passing of time on an old building in remembrance of a past event.
The black and white photo evokes the past and reminds us lessons we sometimes forget. The perspective in the camera shot focuses thoughts on the future, perhaps symbolising transmission to future generations. Overall, the photo provides an artistic and poetic appraisal of flood markers that link the floods of the past and prevention today.”

“The Huveaune is a small coastal river that flows into the sea in the bay at Marseille and after a long period of rain, the banks were saturated and could take no more water. The wind, which was whipping up waves in the background and would take some time to dry out the ground. The photos were taken during a strong bout of Mistral after an extended period of wind from the south east.” 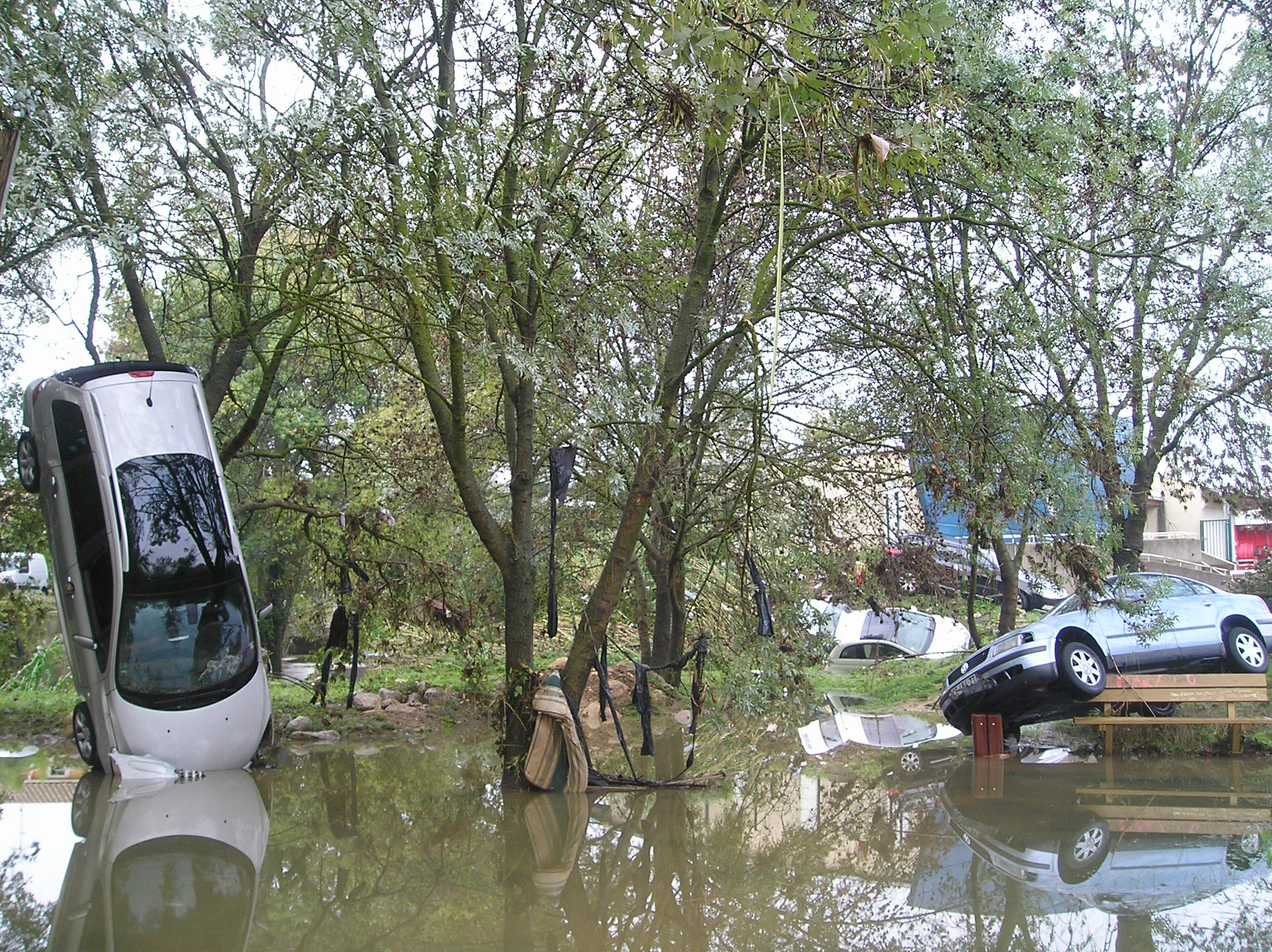 Fifth prize:
AFTER THE FLOOD OF THE RIEUMASSEL

“A storm cell sat above Grabels (34) on the night of the 6 to 7 October 2014, over the small Rieumassel river catchment. 6 hours of heavy uninterrupted rain followed and as day broke, members of the local consortium visited the hardest hit areas. The first image that stuck in our minds were the homes struck by the flood, with flood water lines ranging from a few centimetres to several metres high and the mud caked on the walls and floors. The second image shows dozens of cars swept away by the floodwaters, piled up on top of each other or wrapped around trees. It just shows the sheer power of the flood.”

THEME 3
Society protecting itself from flooding 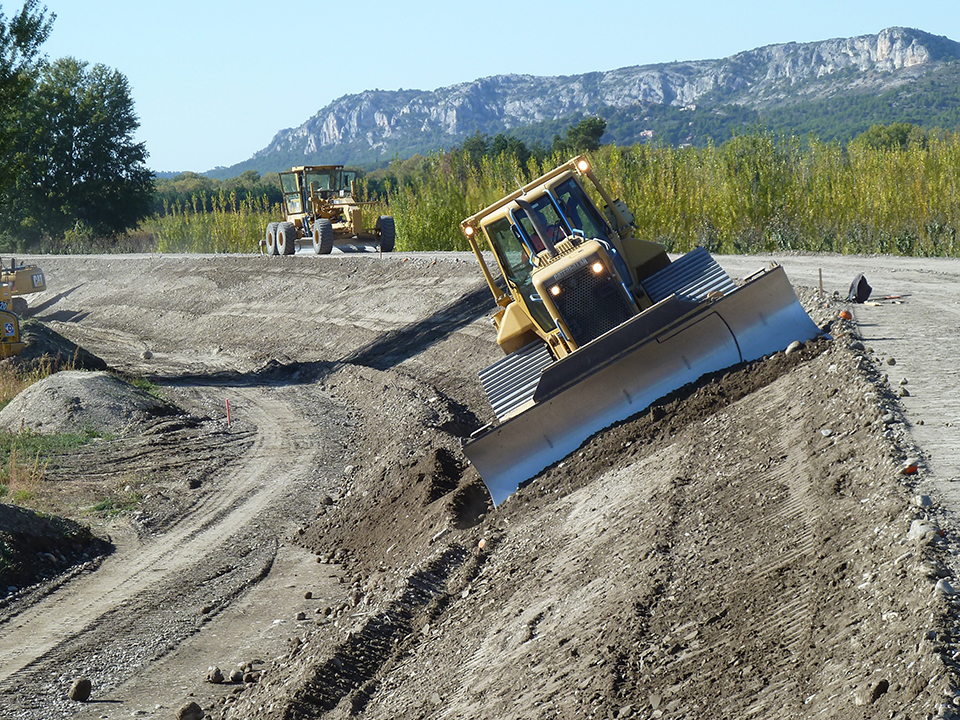 “The photo was taken during building work to reprofile the Royères flood bank at Charleval (13). It was one of a series of tasks to reconfigure a 15-km long inter-municipal flood protection system along both banks of the Durance.
The flood protection work stood out because it combined efforts to reinstate the river’s profile by drawing back the dykes from the riverbed and banks. This resulted in a countryside feel to the photo rather different to the typical landscape found along the riverbanks.
A little anecdote: It was chatting with the bulldozer driver in the photo that I learned about the deft skills needed to profile the embankment so spectacularly and efficiently, like this. Faced with the task, he profiled almost 20,000 m² of dykes!” 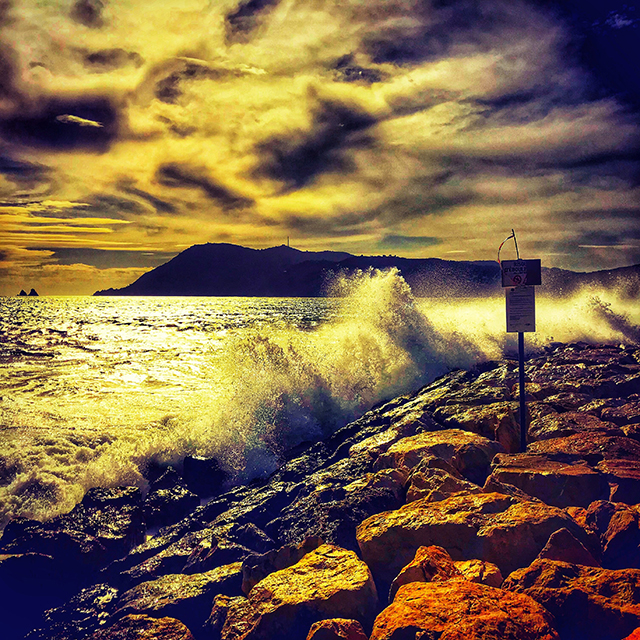 Second prize:
STORM IN THE MEDITERRANEAN

“It was March 2018, on the Plage des Sablettes, at La Seyne sur Mer.
I was walking with a couple of friends at La Seyne sur Mer (83) when the Mistral, a powerful south-easterly wind, started to blow.
It was March and there was virtually no one on the Plage des Sablettes which accentuated the flat calm sea that we contemplated in front of us.
Suddenly, gusts of wind threw a breaker against the boulders of the sea wall.
Now the peace was transformed into a chaotic scene.” 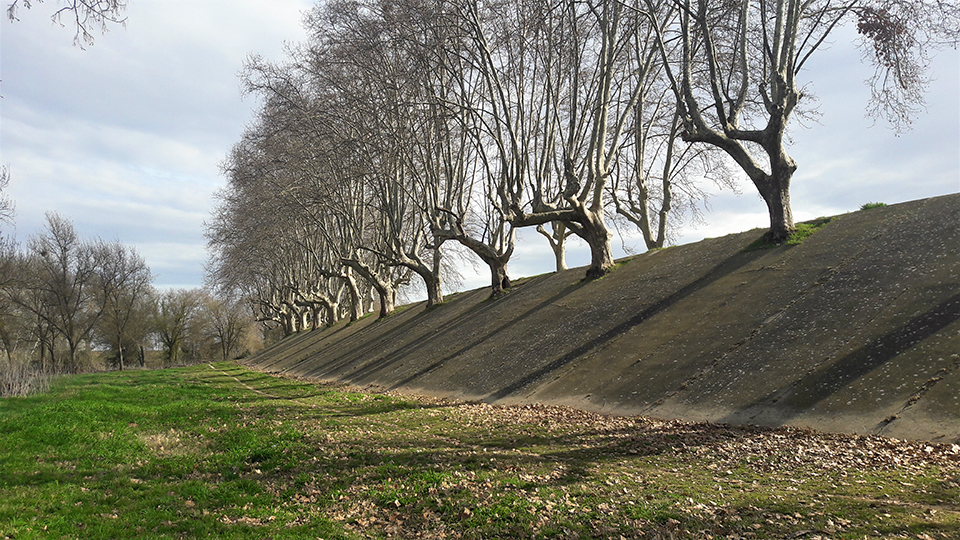 “This photo was taken at Marsillargues (34) for my studies.
In 2019, I completed my dissertation project for my landscape Designer degree at Versailles. The topic was managing water-related risks in the Camargue (salt and fresh water). First, I focused on the Vidourle River to judge what effect it had on the local area. After studying the map, I walked along its banks as often as possible, from its source (at St-Hyppolite du Fort) to the sea (at Le Grau du Roi) and back again. These trips helped me understand and grasp the level of risk from water to the local area and ways to avoid them, anticipate them and remember them.” 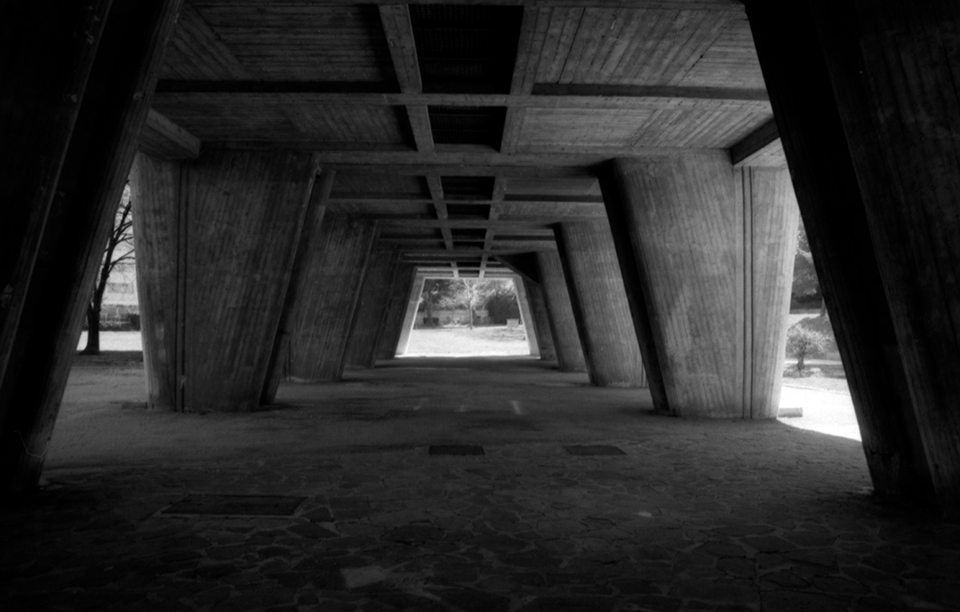 “The Cité Radieuse… but also solid is the feeling you get when you see the 34 nine-metre high piles designed by Le Corbusier in 1952.
Piles were initially used to enable architects overcome constraints imposed by the land, they free up the view as well as space and freedom of movement for people. Nowadays, they provide another dimension making buildings seem unsinkable
The Cité Radieuse has nothing to fear despite being listed in a blue zone, “at risk” site in 2017, when the Huveaune PPRi Risk Prevention Plan, in Marseille.”

“The village of Codolet in the Gard was devastated by flooding in September 2002 and December 2003.
Protection against the floodwaters of the Cèze and Rhône Rivers is now guaranteed by a 3.5 metre-high, 2.5 km-long flood bank, skirting through vineyards and surrounding the village. When the Cèze flooded in November 2014, Codolet was cut off but not flooded unlike its neighbour, Chusclan.” 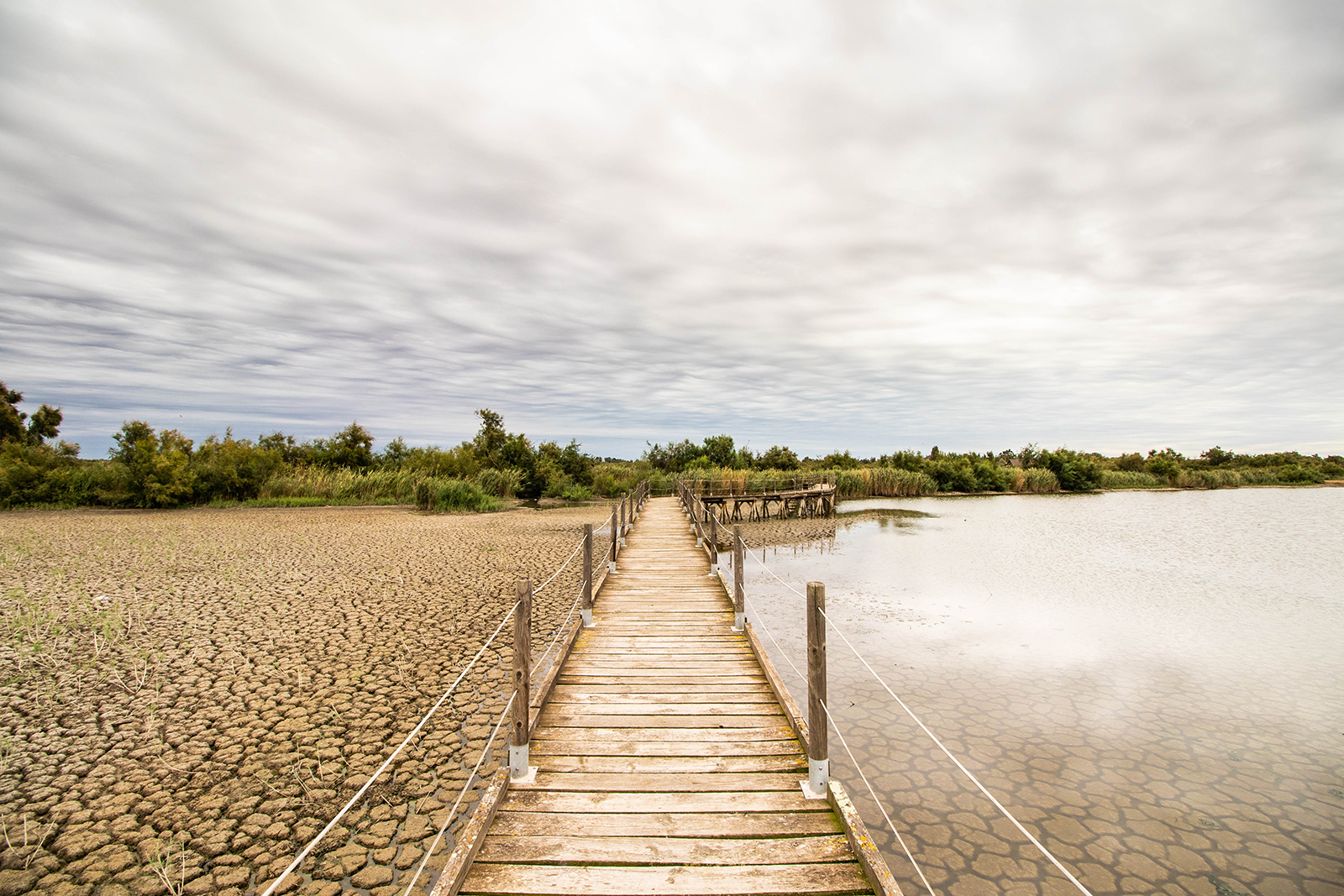 AFTER THE STORM IN CAMARGUE
Photo : Didier.wu 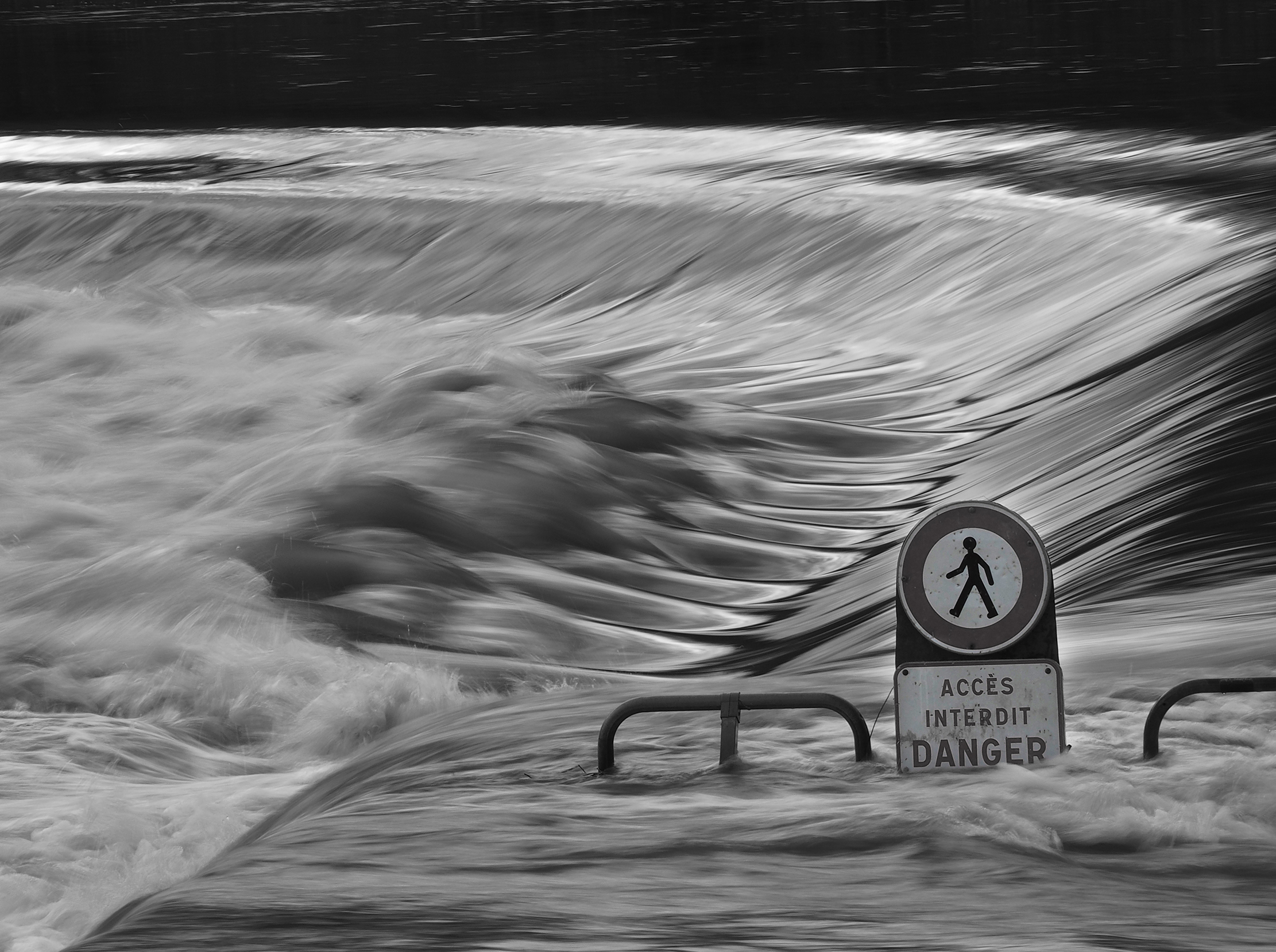 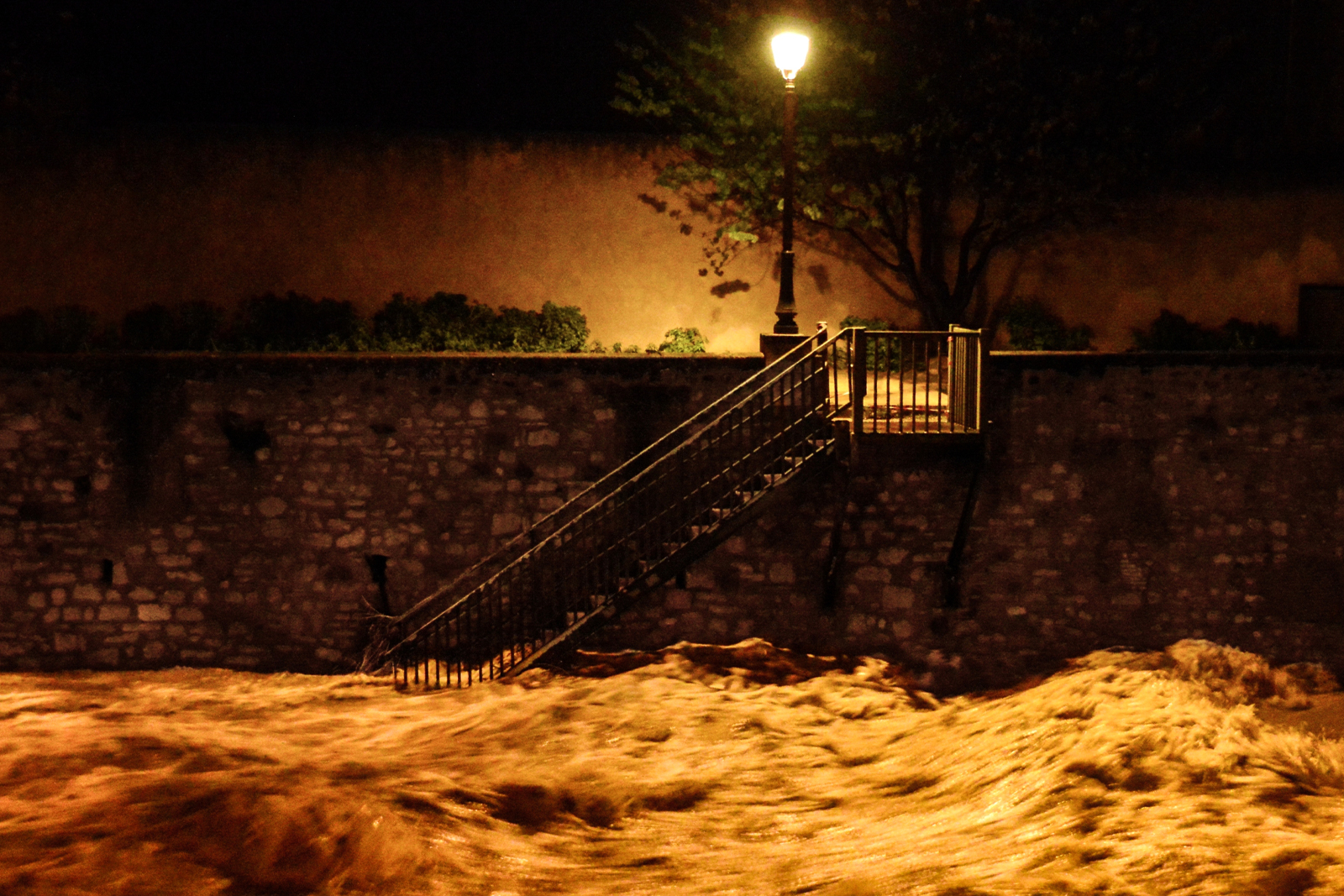 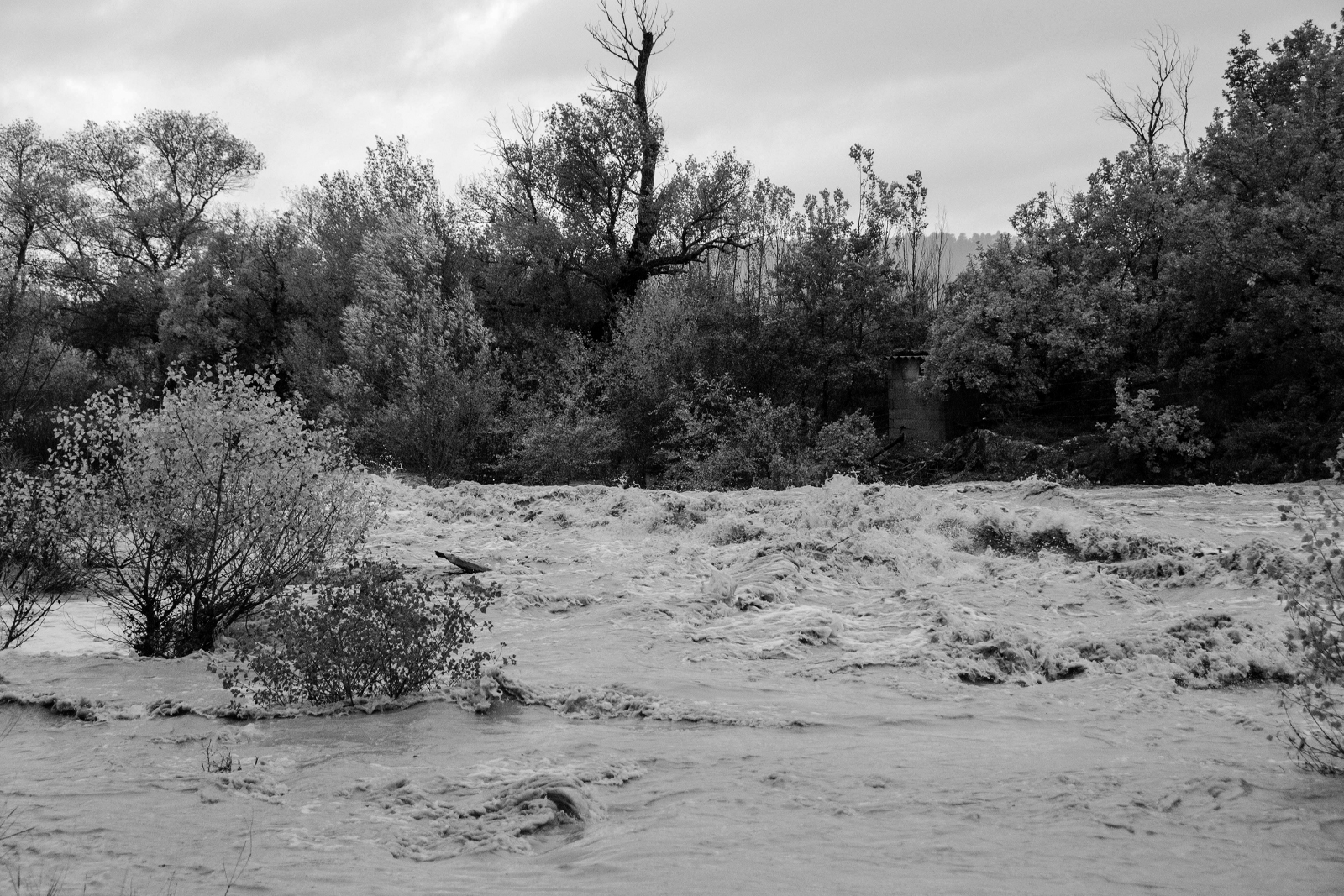 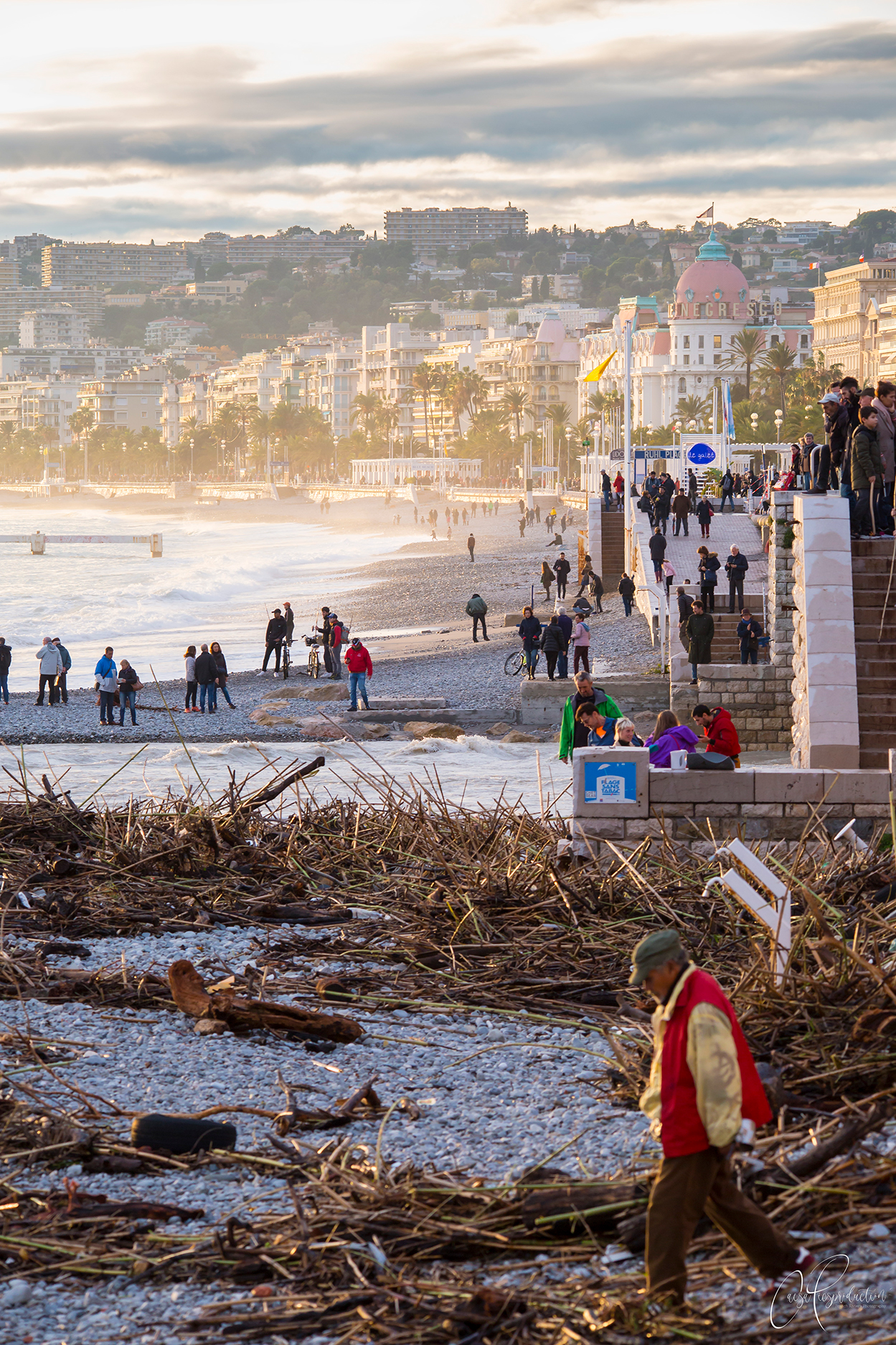 Clues from floods of the past

First prize:
HE BEACH AFTER THE STORM 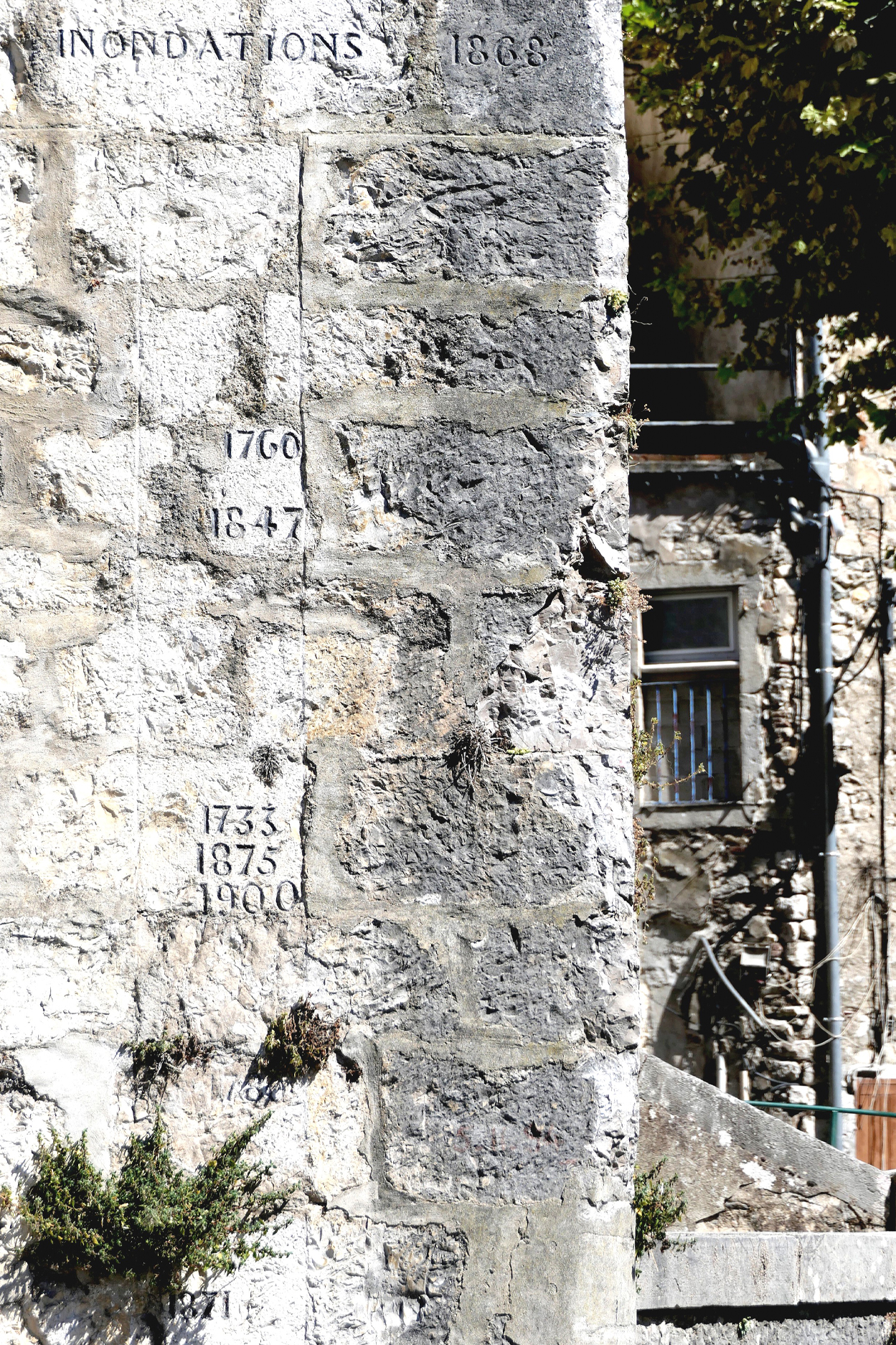 Clues from floods of the past

Second prize:
HE TALE OF PAST FLOODS
ETCHED IN STONE 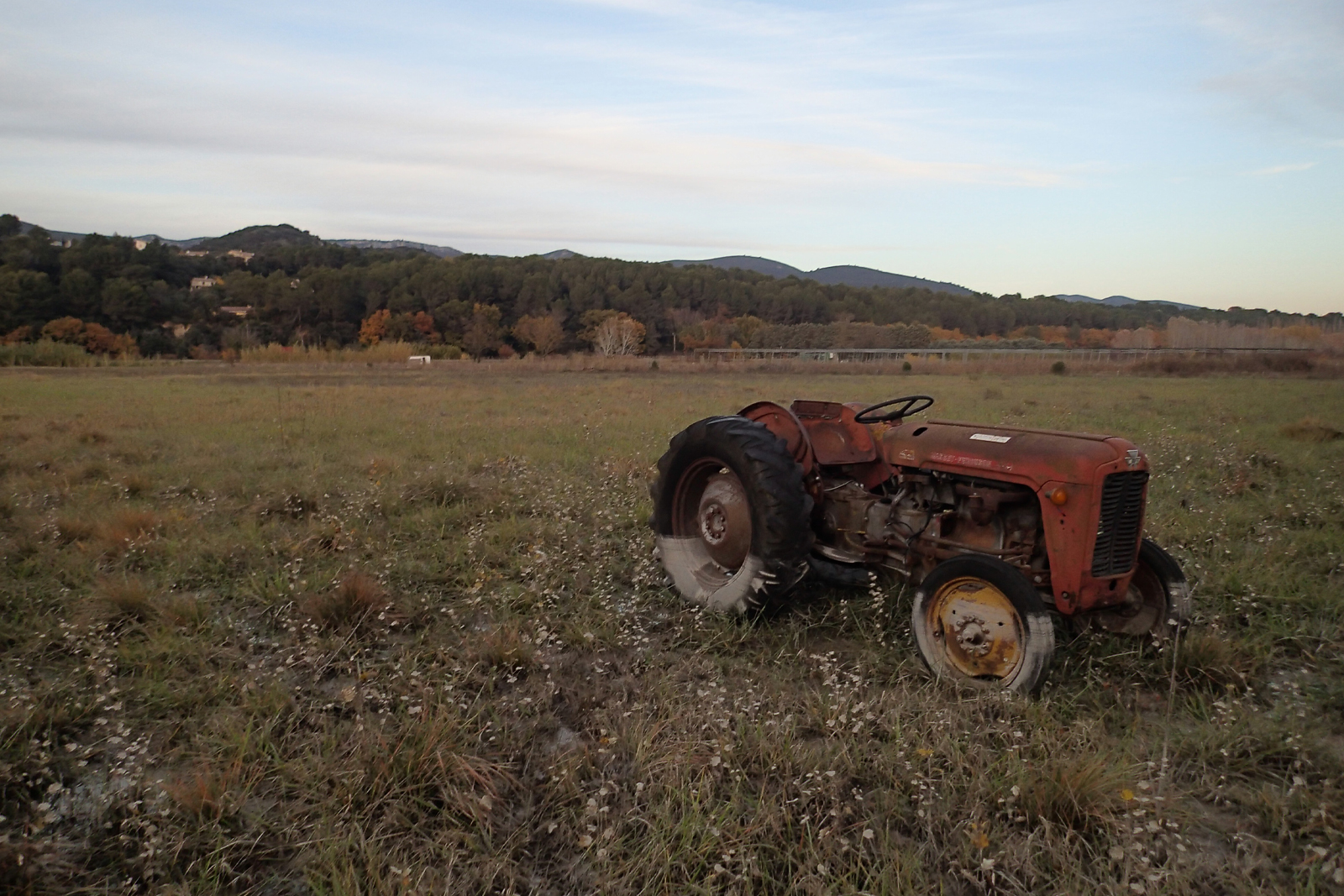 Clues from floods of the pas 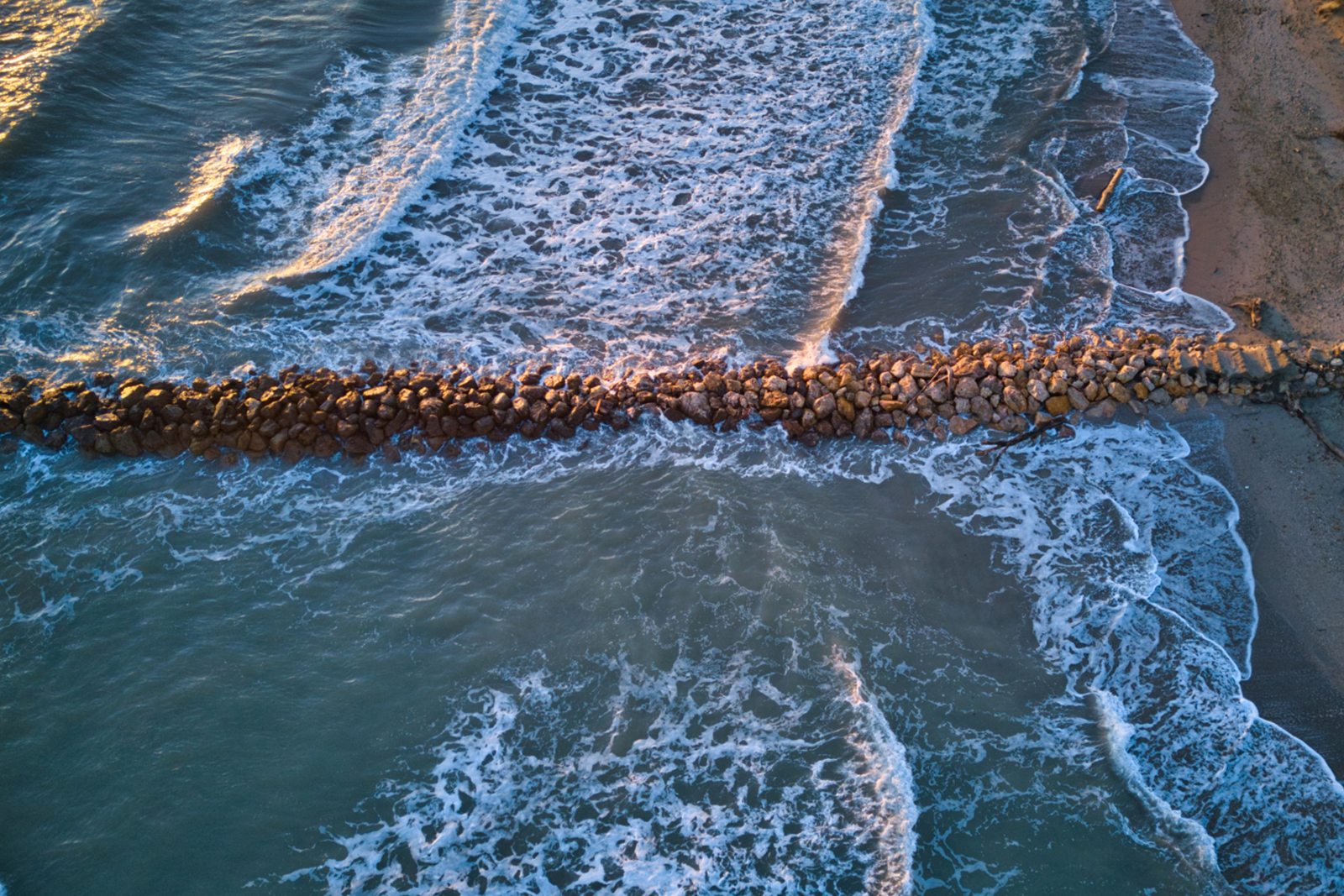 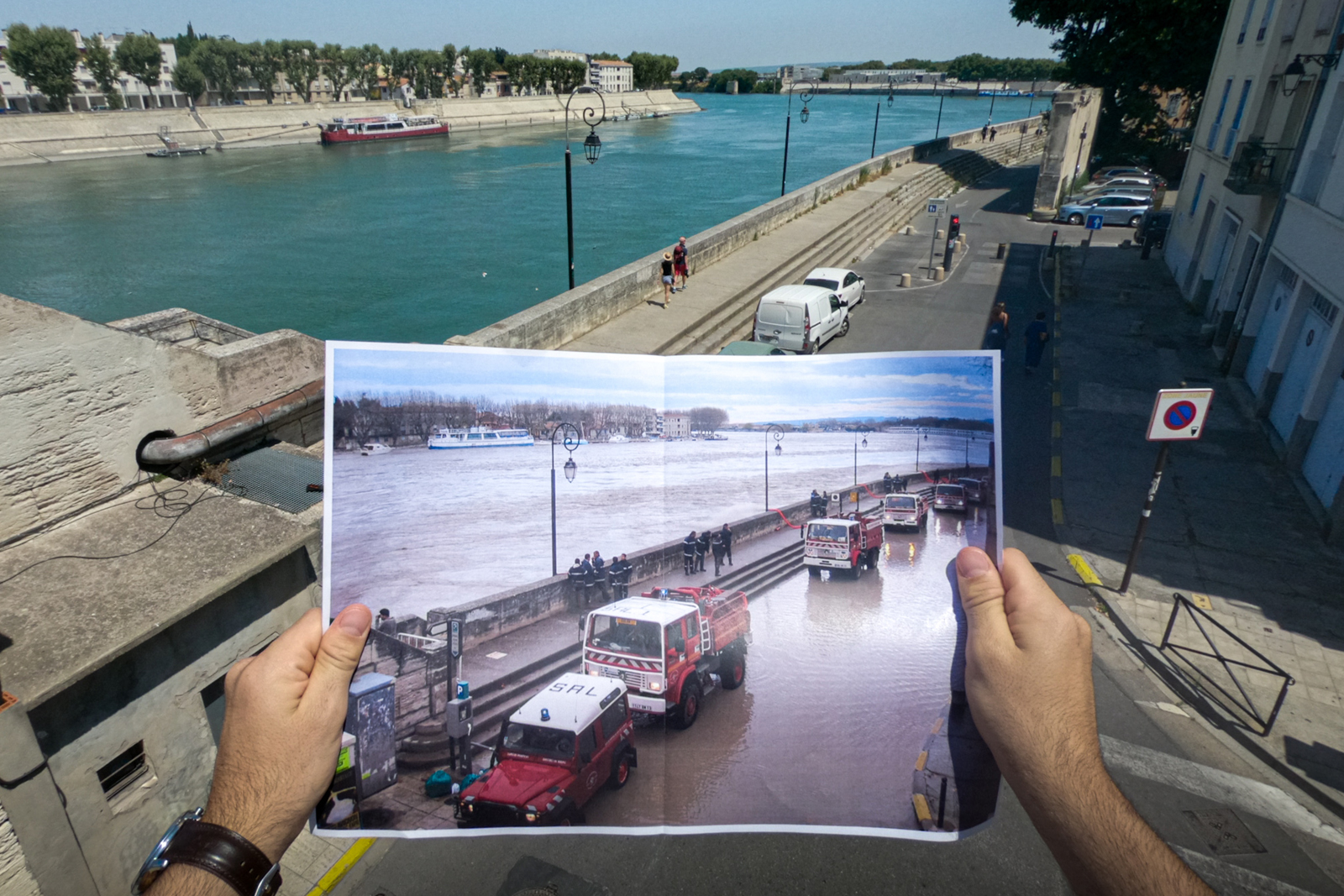 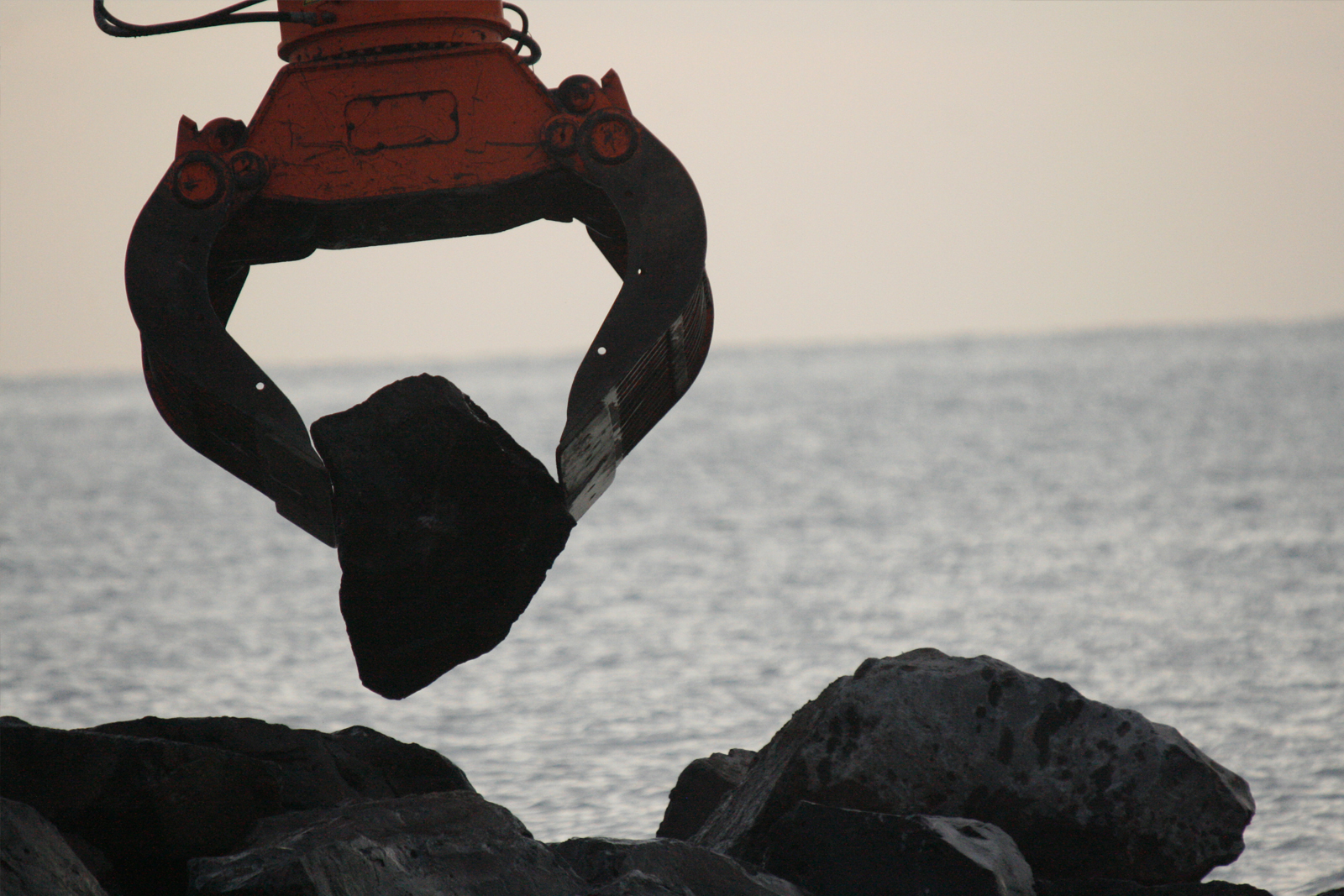 Third prize:
A HELPING HAND COMES TO THE RESCUE